I Love It When The Lego Bricks Come Together

The promise of modern programming is this: you take a library here, a nuget package there, combine them with a webservice et voila! a working application. This is what I though creating my next hobby project would be. Just put some lego bricks together to create a usefull application.

In reality it didn't go that smooth. The experience was more like taking some Lego bricks and duktaping them so some Mega Blocks. Also string was needed to tie some Playmobil together. Oh, and a 3D-printed piece was needed because the thing I needed didn't exist yet. But when everything finally was jammed in it's place, the feeling of accomplishment was amazing. I made this! 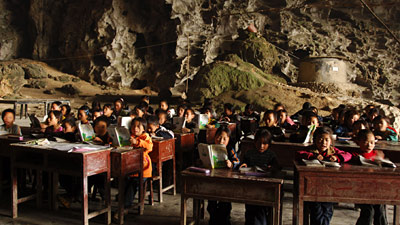 We were doing some work on caching at work the other day, sprinkling calls to cache values here and there in our methods. I couldn't shake the feeling that this was creating a spaghetti-mess where what a method should do got dilluted with the caching logic. I then remembered that this was exactly the problem Aspect Oriented Programming set out to solve. Wouldn't it be nice if you could decorate a method with an attribute and all the caching logic would magically be applied to the output of the method. Like this:

Bluetooth Keyboard on the Raspberry Pi 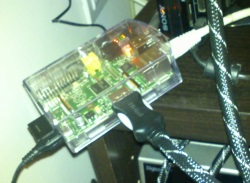 So I joined the hype and got myself a Raspberry Pi. I loaded it with RaspBMC and now I’ve got a nice little media centre connected to my TV. All my music and pictures already reside on a NAS in the utility closet upstairs. I experimented with using my PS3 as a media center (too noisy and bad codec support) and with a DLNA capable blu-ray player (silent, but clumsy UI and also bad codec support), but nothing really worked that great. With the Raspberry, I now have a great front-end for my media collection. It’s silent (passively cooled) and runs every file I throw at it.

I planned to do some other stuff with this Raspberry, so I picked up this Bluetooth PS3 keyboard from a bargain bin and a Bluetooth dongle. Thinking that Bluetooth is a pretty well known these days, I thought pairing it with the Raspberry would be a piece of pie.

Boy, was I wrong. I don’t speak Linux and apparently Linux doesn’t really speak Bluetooth that well. Luckily, I speak Google pretty well and after an evening tinkering with obscure command line tools and strange text editors, I managed to get it to work.

So if anyone out there is struggling to get a Bluetooth Keyboard to work on the Raspberry Pi, here are the instructions to get it to work.

Read the rest of "Bluetooth Keyboard on the Raspberry Pi"

Data binding in Webforms has never been easy. Either you used the Datasource Controls and end up with an overcrowded markup; or you bind your data manually in the codebehind and end up with an overcrowded codebehind page. No matter what you chose, ‘magic strings’ will be used and you can forget about testability. Those hipster MVC folks have so much easier. One method on the controller just supplies the view with data. No lifecycle, no magic strings, just clean code.